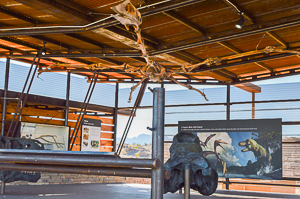 Solitude, dark skies and deep canyons are what come to mind when most people think of Big Bend. Though dry winds now whip through the cacti and small shrubs of the Chihuahuan Desert, Big Bend National Park used to be a very different place. 130 million years ago, the entire region of Southwest Texas was a warm, shallow sea that stretched from the Gulf of Mexico, all the way north to the Arctic Ocean. Imagine white sands, rocky outcroppings, and sparkling blue water filled just below the surface with prehistoric marine life. This was the age of the dinosaurs. Tyrannosaurus Rex ruled the lands, Xiphactinus the seas, and Deinosuchus, a giant alligator-like monster, roamed the space between.

These dinosaurs have long-since been extinct, but the combined efforts of the Big Bend Conservancy and the National Park Service have now made viewing and learning from ancient history easier than ever at Big Bend National Park! As of January 14, visitors can now explore the Fossil Discovery Exhibit. This $1.4 million open-air pavilion has been built to showcase the impressive geologic history of the park, as well as commemorate the 100-year anniversary of the National Park Service in 2016. 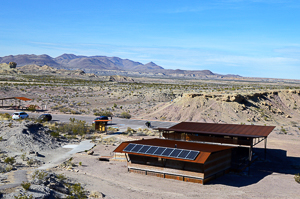 The exhibit boasts life-size bronze replicas of Deinosuchus and Tyrannosaurus Rex, and an overhead replica of Quetzalcoatlus northropi, the largest known animal capable of flight, with a wingspan of 36 feet! It is a priceless addition to the park and, “The most significant addition to Big Bend National Park’s visitor services system in the past 50 years,” according to The Paisano of Big Bend National Park.

Chisos Mountains Lodge had the honor of catering the banquet for the Grand Opening celebration at the Panther Junction Visitor’s Center, and three of our management staff were present for the ribbon-cutting ceremony: Dove Brown, Lars Larson, and Claire Fausey. We are so excited to have been a part of this momentous occasion, and we invite all of you to come experience this incredible place we call home at Big Bend National Park. Feel free to learn more about the exhibit on the Fossil Discovery Exhibit website.

Back to Blog Home